A Memorial Service was held for our much loved volunteer, Jim Lumsden RIP, at St Luke’s Church, Rigbourne Hill, Beccles on Friday, April 29th at 11am.

Despite Jim’s strict orders for “NO FUSS”,  the service was attended by a large crowd and several tributes were paid to this popular Beccles stalwart.

Former Chairman, Vaughan Shea, led the tribute on behalf of Three Rivers Talking Newspaper, a copy of which can be read below:

A Tribute on behalf of Three Rivers TN by Vaughan Shea

Good morning. For those of you who don’t know me, my name is Vaughan Shea and I was, for over 10 years, the chairman of the 3 Rivers Talking Newspaper for the Blind.  And it is in connection with Jim as a volunteer for the Talking Newspaper that I want to talk about today.

Jim was a long standing volunteer for the T.N and was a regular, very reliable and well liked reader on the C team.  I first met Jim in the early 1990’s  and was immediately struck by his presence in the room.  If Jim was there, you certainly knew it – Jim’s response on meeting never changed from the first time to the last. “How are you Jim?” I would enquire, and the response would always be “OLDER… and DAFTER”.

Jim would often have a musical score with him on a recording night and in between his readings he would be silently mouthing the words. There was always plenty of banter around the table with his fellow readers, with Mary Weavers in particular, being near neighbours and fellow golfers as well as their interest in the talking newspaper. Jim’s hand-over to his fellow reader Pat was usually “And now over to PATRICIA”.

Jim was an amazing ambassador for the talking newspaper, helping organise and participating in a number of concerts over the years with the Friends in Harmony choir, the  proceeds from which would benefit 3 Rivers. He was also very persuasive in getting others to join the 3 Rivers team. Indeed, our current Chair Emma was cajoled into joining the talking newspaper by Jim.

I also fondly remember the annual cake stall held in the precinct in Beccles, to raise funds for the talking newspaper. Jim’s arrival at the stall was usually a fairly noisy affair as of course he knew so many people.  And then, the greetings and pleasantries over with, his choice of cake?  Of course it had to be a DUNDEE cake!

I know that Jim has been quoted as saying how lucky he was to live in Beccles, but I can’t help thinking that in fact we were very lucky to have Jim in our midst.  Many people’s lives were made all the richer and organisations like 3 Rivers Talking Newspaper and others benefitted greatly because of Jim Lumsden, and I am proud to have known him.

Please come along and say hello to Emma and Jill at a Community Partnership event to be held in Bungay Community Centre on Saturday, 21st May from 11am to 1pm.

Community partnerships are a great way for the council, partners and communities to work together and Three Rivers Talking Newspaper is delighted to be involved along with lots of other local community groups.

The address is Old Grammar Lane, Bungay NR35 1PU. There is plenty of parking and disabled access throughout the building.

Do come along and let your voice be heard! 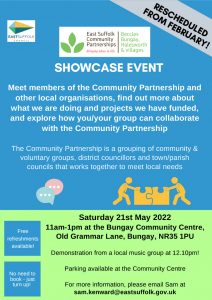 Click on the links below to read our policies in full.

We’re so sad to share news of the recent death of a long standing and much loved volunteer at Three Rivers, Jim Lumsden.    Many listeners will remember our larger-than-life Scot, Jim, as Reader on the former C team.  But Jim’s involvement was not limited to reading – he was also involved in Committee meetings and in organising fundraising concerts and other events on behalf of Three Rivers.

Some of you might also have known Jim from his days as a dentist in Beccles, as warden in St Michael’s Church, Beccles, or from elsewhere.  Let’s put it this way…if you ever came across Jim, you will not have forgotten him!

He will be sorely missed.

Our sincere condolences go to Jim’s family and his many friends.
May he rest in peace.

PS:  A Memorial Service is being held for Jim at St Luke’s Church, Rigbourne Hill, Beccles on Friday, April 29th at 11am.

A lovely tribute to Jim was included in a recent edition of the Beccles & Bungay Journal.   You can access the Obituary here.

We’re delighted to announce that, just before Christmas,  we were granted £2,784.13 funding from Suffolk Community Foundation through the David & Jill Simpson Fund, in order to help us expand the Three Rivers Talking Newspaper community, following a tough period during the Covid pandemic.

The Simpson fund supports grass root organisations primarily to provide support to older people over the age of 70 years and to those groups supporting the advancement of education, the protection of good health both mental and physical and the relief of poverty and sickness in Suffolk.

The fund was established in memory of Miss Rosemary Jill Simpson and her younger brother David.  In partnership with their solicitor Jonathan Long at Ashton Legal, Suffolk Community Foundation has created a fund that interprets the passion and focus of both Jill and her brother David during their lifetime and seeks to ensure that their legacy will live on and continue to support good causes that they loved for many generations to come.

We are most grateful to the Fund and also to the wonderful staff at Suffolk Community Foundation for helping us secure this important lifeline.   And we are committed to ensuring that all funding will be used exclusively for the improvement and expansion of Three Rivers TN and the service we deliver to our listeners and the local community.

On Saturday, 11 September 2021, volunteers, listeners and friends of Three Rivers Talking Newspaper met to celebrate their move from Bungay Honeypot Centre to the smart new studio at Bungay Community Centre.  Scroll down to see a selection of pictures.

Emma Welton, Chair, praised the way Three Rivers readers and technical officers had adapted to remote recording from home during the first lockdown, thus keeping blind and visually impaired listeners in touch with local news as much as possible.

Above all, the celebratory afternoon tea was a chance for everyone involved with our talking newspaper to meet up for a long awaited chat over tea, sandwiches, scones and yummy cakes.

Huge thanks go to everyone involved and especially to Maisebrooke Farm in Shipmeadow, who kindly donated a very generous hamper full of delicious local goodies as a raffle prize.   The raffle raised £130 for Three Rivers and this will be spent on the purchase of new boomboxes for our listeners. 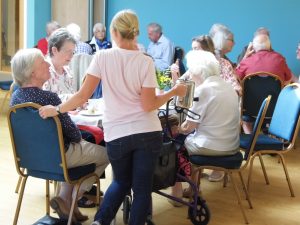 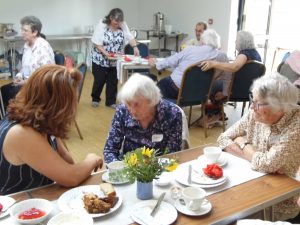 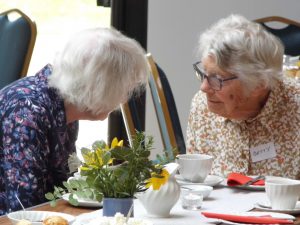 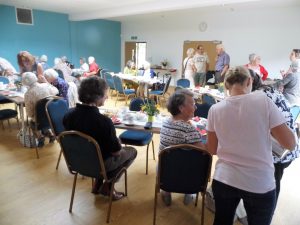 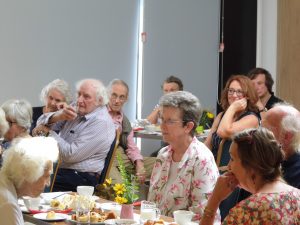 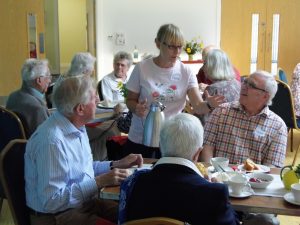 Well, it felt like our first day at a new school!   Not only was June 3rd 2021 our first day back in the studio following lockdown – it was also our first day in the  NEW studio.   We’re delighted to say that we’ve now settled into our new home at the brand new Bungay Community Centre.

Huge thanks to Martin for ensuring a seamless transfer.

The annual three-way quiz between local Talking Newspapers was held on Thursday last week at Bungay Golf Club, hosted by Three Rivers. Eleven teams vied for the trophy and Bungay’s Deputy Reeve, Sylvia Knights, did the honour of being Quiz Master for the evening. The friendly rivalry concluded with a win for Three Rivers team, The Darbies, with K9 Crew coming a close second. The Committee of Three Rivers Talking Newspaper would like to thank Bungay Golf Club for a super buffet supper, the teams from Sound East (Lowestoft) and Grapevine (Gt Yarmouth) who travelled to Bungay for the event, and especially to Sylvia Knights for proving a fair and humorous Quiz Master.

Quiz 2021 will be hosted by Grapevine.

Anne Frith, one of our listeners and a long serving member of our Committee here at Three Rivers TN, passed away recently.
Although she was probably best known in Beccles as a historian and author, Anne was involved in several local and  national organisations, including Guide Dogs for the Blind and, of course, our very own Three Rivers Talking Newspaper.   She served as Listener Representative from the foundation of Three Rivers TN back in 1991, and continued in this role for a staggering 25 years.
Those of us who were lucky enough to work alongside her on the Committee appreciated her sharp wit and practical advice. Anne never shied away from calling a spade a spade and was instrumental in bringing about many improvements to the way we do things at Three Rivers.  As for our annual quiz, Anne was not just a regular participant; she was an avid competitor and frequently ended up on the winning team.
Above all, Anne will be remembered as a fiercely independent, intelligent and capable woman who achieved far more than many of us could ever dream of.
Our thoughts and prayers go to her family and especially to Anne’s devoted husband John who has also been a huge supporter of Three Rivers.
May she rest in peace.

There will be a talk by Torch Trust for the Blind in Topcroft church this coming Sunday, July 7th, at 11am.  The talk will take place during the Sunday service and be followed by refreshments.  All of our listeners and their family/friends are invited to attend this interesting talk.   The church grounds and the building itself have disabled facilities.  There is no need to book your place for the talk  – just come along to Topcroft church and help will be on hand for anyone who needs it.

The Torch Trust for the Blind enables people with sight loss to discover the Christian faith and lead fulfilling Christian lives. To this end, they provide Christian resources and activities for blind and partially sighted people, including a free lending library and a range of magazines, in various accessible formats.  People of all faiths or none are welcome to use the services of the Torch Trust and you can find out more about them on www.torchtrust.org